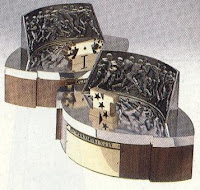 And most importantly the ending is going to be the same.

I remember being in the Linc that January day. I was also there for the games against the Bucs (ok, I was at the Vet for that one) and Panthers. On January 23, 2005 the past didn't matter. I was confident that the night would end Super.

Despite the presence of Vick, the Falcons were no match for the Eagles (even if Fred-Ex was the the #1 WR target). McNabb was hot and the Defense was dominant. The QB and D finished the game the same way. 2 TDs and 32 yards rushing. The Falcons shut out in the second half.

It's now January 18, 2009. I am confident that the evening will again have that Super feeling. McNabb will again prove to be the better QB and the D will outshine even the 2005 unit.

Unfortunately, it is worse that 2002,2003,2004. (I'm writing this at Halftime) It's worse because Reid and company will again be able to say that we got so close, so we don't have to make any major changes, and next season will be the same!