Anquan Boldin Is Not God 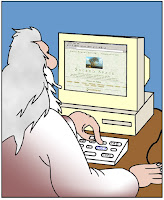 I hear that Anquan Boldin can walk on water. That he even might be the elusive eighth wonder of the world.

Wait, no? You would of fooled this fan.

Every day for too many days it is Boldin this and Boldin that. And with every Boldin mention there is of course a tie to our Philadelphia Eagles. Enough already...please!

Sure Boldin is a stud, top WR. But history shows us fans that the Eagles aren't going to pull the trigger. So why set ourselves up for disappointment when Boldin is absent in Lehigh this summer.

If by some miracle Boldin does get traded to the Eagles, well, all the better. But last I checked it was not the WRs that lost the Eagles this last championship game. They were able to get open and put themselves in position to make plays and when accurately thrown to they did. It also wasn't the WRs that were letting up all those points.

So I guess I too fell into the trap of writing a Boldin post. Sorry, I know we all had enough already.
Posted by chris klinkner at Friday, March 13, 2009

Ha - you are doing that thing where you act like you don't care, but if it happens you will be exploding all over the place.

It's like when a pretty girl walks by and you say, "She's ugly" but if she stops to talk to you, you get all goofy.

i don't disagree. I'll be at the Linc switching between my DeSean and Boldin jerseys.

But until it does happen....can we please limit the chatter. It's like "Single White Female" with this town's Boldin obsession.