The Should Just Run 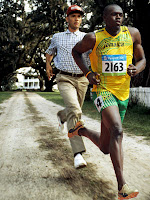 How does the Peters trade become even better? Easy, Reid stays with a balanced offense attack or even favors a running attack.

This might be wishful thinking on my part, but the current make-up of the OL just screams for a the coach to RUN the ball. The starting OL averages 331 pounds and screams 4th quarter dominance.

So the next step is to improve the running game. I still believe there is at least 1 good year left in B-West. Good meaning 1000 yards, with a YPC of 4.5 yards. To elevate the run game to great there has to be a complimentary running back, who if needed can also carry the load.

That running back isn't on the roster or isn't left in free agency. That back is in the draft (less than 1 week to go!). Now it's up to the Eagles to show how much they value improving the RB position.

Do they use their 1st rounder on a RB? If so and if you believe the mock drafts than Moreno and Donald Brown should be available at #21. Wells should be gone, which is fine since his game isn't a match for the Eagles' offense and he also doesn't have the all around game of a Moreno or Brown.

Do the Eagles wait until the 2nd round? At that point the team would be looking at Greene, Coffee, Jennings, or Andre Brown. Each are talented but using a 2nd rounder on them might be a bit of a stretch.

Or do the Eagles take a chance and wait to a later round to address the RB position? At this point you are looking James Davis (Clemson), Mike Goodson (Texas A&M), or Cedric Peerman (Virginia). Each are good backs, but, as you can see, there is a big drop off from the round 1 talent.

So here's hoping that the revamping of the OL this off-season is a sign that the Eagles will HOPEFULLY show a commitment to the running game. If they are committed then pick #21 will be a RB. We do not need any more busts like 3rd rounders Moats or Hunt.
Posted by chris klinkner at Sunday, April 19, 2009