Give Him the Money, Maybe the Years

So it sounds like Mr. Franchise is going to be getting himself a revised contract.

If the reports are true McNabb would be getting more money over the final two years of his current contract. The prospect of an extension remains show me first.

All sounds peachy to this fan. It's hard to rationalize a possible one year wonder like Matt Cassell earning more money than an established, All-Pro like McNabb .

As far as holding off on the extension I also like the move.

It's difficult to give an older QB an extension when you still have an untested 2nd rounder on the bench. Maybe Kolb is the real deal and if given playing time over the next 2 years (McNabb does have a history of injuries) he can show he is the future after 2010.

Redoing the final 2 years of the current deal should make McNabb happier (and maybe even break his media silence) and it allows the Eagles to keep a QB who is still one of the leagues' best. If you give up now and Kolb is a bust the franchise is screwed!

Reworking the current deal without an extension puts all the pressure on #5. If he plays well in 2009 and 2010 then an extension will come that should all but guarantee McNabb retires with the Eagles.

If McNabb plays poorly or gets injured Kolb will get a shot and the QB future of the franchise will become clearer...Kolb, draft another QB, or hit-up free agency.
Posted by chris klinkner at Thursday, June 04, 2009 No comments:

Sorry, I Forgot About Him

With Westbrook undergoing another surgery maybe the insurance policy is already on the roster (and that man isn't Booker!). 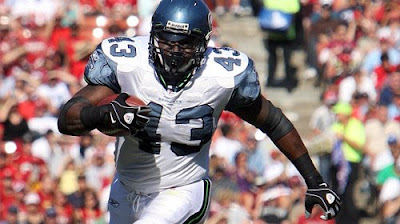 I'll admit it I fell prey to the "big" name left on the market in Edge.

Or one can hope that with an abundance of RBs on their roster that maybe Buck gets cut in Denver!

Posted by chris klinkner at Thursday, June 04, 2009 No comments:

Is Mr. Rosenhaus available? This is Joseph Banner.

The latest news out of a very eventful Eagles OTA is that Brian Westbrook requires surgery on his ankles. The seriousness of the injury and surgery varies from report to report. Regardless another surgery for B-West on his legs is not good news.

I love B-West. He is as dynamic a playmaker as there is in the NFL. But as the injuries continue to mount and the body hits 30 years come September this fan is worried.

The glowing off-season reports on the Eagles have visions of a Super Bowl dancing in my head. Without B-West those visions and hopes get squashed.

Signing a veteran like James gives the Eagles some insurance. McCoy is a rookie...don't forget that.
Posted by chris klinkner at Wednesday, June 03, 2009 3 comments:

McNabb is reportedly close to getting his new deal. Brookover said this today on his Philadelphia Inquirer blog:

If this report is true, cornerback Sheldon Brown has every right to be seething in South Carolina right now, because he is underpaid by cornerback standards.

And with Sheldon not showing up to voluntary workouts, expect Hobbs to get a legit shot at winning his job. They are comparable players, Brown is more physical and much better in press coverage, while Hobbs is quicker and has better hands… their overall coverage skills are similar, however. Brown should be careful what he wishes for.
Posted by justincharlesharlan at Wednesday, June 03, 2009 1 comment: