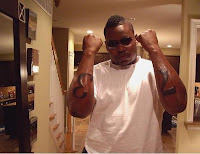 Of course I want the Big Kid to play. The kid is an All-Pro talent. But until Shawn Andrews plays I wish he would just shut his mouth.

Shawn Andrews was again running his mouth today, telling people to stop questioning his heart and that of course he sees himself starting against the Panthers on September 13.

To me Andrews has become like the drunk at the local bar who continues to run his trap about the good old glory days. The guy can't shut up and pass out fast enough for the rest of us.

Shawn loves the money and the attention that being a football player brings (see Bro Hawk as example #1 or his videos here as example #2). Yet the kid doesn't actually want to play the game.

OK maybe I too am wrong for questioning his heart, but until he gets back on the field that is my opinion. As a fan I do not want to go through another season wondering if Andrews is suiting up this week or is again out with an injury (thankfully you don't have to pick an OL on your fantasy team).

If only we could get the current talent of Andrews into a body with the heart of Runyan.

Shawn needs to stop talking, stop resting on past performances, get back on the field, and be a dominant RT for the Philadelphia Eagles.

And why aren't the Eagles moving Stacy Andrews out to RT?

Stacy actually has game experience as a RT and was pretty damn good there with the Bengals. And the Eagles have starting depth at RG. In my opinion it's just another example of the Eagles babying Shawn. Losing your position to your brother would only lead to Shawn becoming more unhappy and we can't mess what that fragile ego.

Just play already Shawn. Be an All-Pro. Anchor the line. Give #5 time to make magic with #10. Make some holes for B-West. And for your sake, make all of us shut-up! All you have to do is play!
Posted by chris klinkner at Monday, August 24, 2009