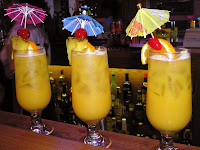 What, the bartender was out of beer? No shot glasses available?

Though the attention on Vick is VERY well deserved, for fans it is going to become extremely annoying to have to read about the constant scrutinizing of Vick's every move. Specifically his every off-the-field move.

The latest controversy surrounding #7 is his alcohol consumption. Reports are questioning if Vick drinking a pineapple and Vodka (should of went for the Vodka and tonic Mike) violates the terms of his probation.

Sadly we should be get used to this coverage. The entire season will be spent wondering if Vick will remain eligible. This fruity drink is a non-story. But Mike's history doesn't have this fan confident that Mike will remain without controversy during the entire season. Good thing #7 is nothing more than a gimmick player. This season is too important to baby sit Vick.

Anyone else worried about possible protesters and drunk tailgaters this Thursday night?
Posted by chris klinkner at Sunday, August 23, 2009

i'm sure that there will be some protestors but they won't bother the fans. most eagles fans will give it right back to them and if the protestors do anything drastic, i would worry about their safety