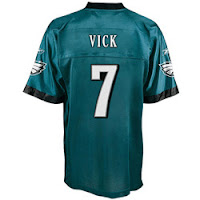 So I am at the game last night and the guy at the end of our row stands up and shouts "WTF, Eagles get Vick!"

WTF sums it up pretty nicely for this fan too.

After an evening to digest the news I am left with a few questions...

These are just a few of my initial thoughts. I am sure we all have our own opinion on the Vick signing.

Overall, I just think that the negatives far outweigh the positives in this signing. Of course everyone, including Vick, deserves a 2nd chance in life, but I just think Philadelphia is the wrong place for Mr. Vick's 2nd chance.

I like your arguments....and yes people deserve second chances, but maybe not to the tune of millions and back in the public eye.

I think Charles Manson should be given a second chance and the Eagles could sign him as a defensive coach. Now that would scare a lot of offenses.