Gone Are The Off-Season Muscles 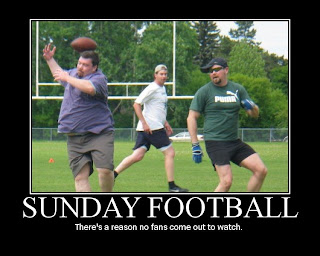 Eagles football is back, well at least for some of us. Huh, what?
Remember when the Eagles failed to resign Dawkins this off-season and fans screamed how they were now done with the Eagles. They were spending their off-season looking for a new football team. No more cheering on the Iggles. Hope that new team is playing at 1pm today or you are a big Phillies fan.
If Dawkins didn't turn off the fan then the signing of Vick did. Again some Eagles fans screamed "No mas." The people were unable to separate the horrific off-the-field acts of Vick with on-the-field football. I hear libraries are again open on Sundays...enjoy the quiet.
But come on it's a football Sunday. Time to put away those off-season muscles. You know you will in front of the TV at 1pm this afternoon. Eagles fans can't just stop being Eagles fans because of some off-season Front Office stupidity.
Save the anger for a worthy cause, like if the Eagles season again ends in disappointment. The off-season muscles will be nice and rested to end the Reid era.
Posted by chris klinkner at Sunday, September 13, 2009