Starting with the OL and FS 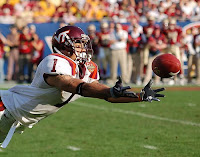 Good news all around for the Eagles and of course us fans. 6 days until the season opener and the Eagles will have 4/5 of their stud offensive line in place and they will have a starting Free Safety that can actually hit!
First the offensive line. I (along with many others) have been quick to worry about and criticize the offensive line this off-season. Well it turns out that, it was only preseason and preseason doesn't count for squat.
When the Eagles take the field against the Panthers this Sunday (football is back!!) the Eagles will have both of their Pro Bowl Tackles in place. Peters may not have shined this preseason but the man must have some talent to earn 2 pro bowl selections. The man is a GIANT and I can't wait for the holes he will be opening for B-West.
As much as I criticized Shawn Andrews this off-season I am ecstatic that my complaining didn't become a reality with Shawn starting the season on the bench. The kid has All-Pro talent and I can't wait to see him and his brother holding down the right side of the line this season.
You need an established veteran at center and the Eagles have that with Jackson. Herremans will be back within the first quarter of the season. At that point look out. The offense has so many weapons this season. The talent all along the OL will pave the way for Pro Bowl seasons from McNabb, B-West, and DeSean.
On to today's news of Macho Harris winning the starting free safety spot over Demps. If you are going to play safety in this league you need to be able to hit. And Harris can hit (take a look at the game film...Demps cannot). Just look at this Harris scouting report...
"Reliable open-field tackler who flashes explosiveness as a hitter. Willing to dirty his jersey against the run. Good lateral agility to elude blockers and will come up aggressively in run support."
True this was a report from college, but regardless these are all qualities I want in a safety. And with a defensive backfield filled with top-notch veterans (Brown, Samuel, and Mikell) I am not worried about starting a rookie (also shows trust in your draft scouting).
Way to rebound from the Feeley move Andy!
Posted by chris klinkner at Monday, September 07, 2009