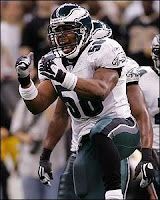 This wasn't week 1 in 2008. These weren't the Rams. The Panthers were 12-4 last season. The Panthers were the NFC South division champs. The Panthers have the top 1-2 rushing combo in the NFL. The so-called experts had the Panthers again being one of the NFC's top teams this season.
Questions swirled all around the Eagles Defense this off-season. There was the unexpected departure of fan-favorite and future HOFer Dawkins. Dawkins was then replaced by a rookie S who played CB in college. Then there was the tragic passing of legendary coach Jim Johnson. Lastly, one of the conference's top MLBs, Bradley, was lost for the season in a silly exhibition show.
So based on all of this the Eagles D should of been in big trouble today. Not quite. Not even close. To say the Eagles D dominated the Panthers today would underestimate their performance. McDermott must of been talking to JJ the angel on his headset this afternoon. The gameplan was perfect and then some. I loved the use and Cole and releasing him from the LB position.
Williams and Stewart were held to 72 yards on 25 carries. 5 interceptions were spread across three Panthers QBs. 2 fumbles, 5 sacks, and 1 TD. Makes you wish your fantasy team was starting this D today.
McDermott made his mentor proud today. The Eagles defense showed last season's top 3 ranking was no fluke. The bar is set high for the D. With the McNabb injury and the possibility of Kolb leading this team next week the D is going to need an encore performance against the almighty Drew Brees.
Anyone else hoping that A.J. Feeley is waiting in the Philadelphia airport when the Eagles return home tonight?
Posted by chris klinkner at Sunday, September 13, 2009