Is Andy Reid Coming Back? 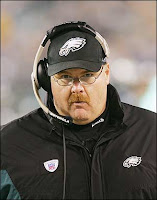 Tonight the preseason ends (FINALLY!) In a little over 1 week the games start counting and the pressure begins mounting.

We all know the bio. Reid and McNabb are entering their 11th season as coach and QB of the Eagles. Until recently the off-season headlines have focused on the question of McNabb's future with the Eagles. Will the team give #5 an extension? Would the team explore the possibility of a trade? Is it 2 more years and done for McNabb in Philadelphia? All good questions...time will tell.

With all the McNabb (and Vick) talk this off-season Reid's future has gone a bit under discussed. It shouldn't if you look at Reid's current deal. Just 2 years remaining. So with 2 years remaining it is logical to think that this upcoming season would be a show me the money or show me the door season.

A coach of Reid's stature doesn't deserve to go into the 2010 season clinging to a 1 year deal. The question at some point this season will be are the Eagles going to again extend Reid's contract?

Bashers of the Eagles' front office will be quick to say that Reid is the puppet running the Banner and Lurie show. Reid will be here as long as he keeps Lurie a billionaire (the latest report has the Eagles valued at $1.123 billion). But to continue to make money you need to put a winning product on the field (otherwise the Phillies will continue to steal all the Philly fan's love and money).

Does average warrant a new extension? Will an 11th season without a title finally be enough to convince ownership that Reid can't deliver a title? At some point even the most loyal owners need to realize a change may be necessary.

The 2009 season is a big one for the big guy. The seat may not be hot now, but each loss is sure to crank up that temperature on Reid.
Posted by chris klinkner at Thursday, September 03, 2009