Is LB the New FB? 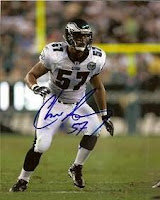 In 2007 it was the Punt Returner position. The oversight cost the Eagles the opening game against the Packers. The season just never got right after that.
In 2008 it was the Fullback position. Too many games were lost because of the Eagles inability to convert short yardage plays. The Chicago Bears game still haunts this fan.
It's now 2009 and I see the LB position as the new position that will surely screw the Eagles this season. Just look at the depth chart as the Eagles begin the 2009 season.
At MLB Gaither is starting with a gimpy knee. Gaither is starting not because he excelled in the off-season but because Mays didn't excel. Currently backing up Gaither at MLB is Chris Gocong, who has zero experience manning the middle. Joe Mays is out up to 4 weeks so he is zero help for the 1st quarter of the season. And once the pressure was on Mays this off-season he crumbled so I am not too optimistic that he will step up when the games actually count.
The picture is just as bleak when you move outside. Based on his progression last season I am excited about Gocong at the SAM position. Hopefully Chris is put into more situations that allow him to pressure the QB. Behind Gocong is 7th round draft pick Moise Fokou. A rookie means no game experience. Being a 7th round pick screams project to this fan.
Over at the WILL position you have Jordan. No complaints with Jordan as his insertion into the starting line-up coincided with the defense improving last year. Jordan won't lose a game for you, but sometimes you wish there were a few more game changing plays in him. Backing up Jordan is Tracy White. The guy had zero tackles last season and 27 total tackles for his career. This numbers scream for Jordan to stay healthy.
Or maybe I am wrong about the LB position. Maybe Free Safety is the position of doom this season for the Eagles. When a LB gets beat there is still the S to keep the opponent from taking it to the house. When Macho Harris gets beat it's a sure 6 points!
Posted by chris klinkner at Friday, September 11, 2009

Gaither was the man in the middle when our defense elevated itself into a top 10 unit two years ago. He is a respected vocal on-field leader.

While he lack the size and physicality of Bradley, he is by far the better cover backer and has an amazing football IQ.

Gocong is weak in coverage, but solid against the run. Jordan is an average to slightly below average starter at WILL, but he can get the job done. Fokou looks like he'll provide good depth and May is a thumper who can play in a pinch.