Is Vick The Future at QB? 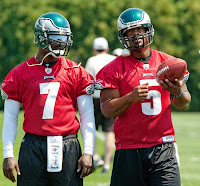 Sorry fellow Eagles' fans, here is yet another Michael Vick post. But I need some outside opinion on radio comments I heard from Jeremiah Trotter on Sunday morning.

It's the opinion of Trotter that Michael Vick will be the starting QB for the Eagles in the future. It could happen in 2010 or 2011, but it WILL happen per Trotter. Though the opinion may first seem outlandish, there is some merit to the thought.
Trotter's argument is that the Eagles will go through too much on and off the field controversy to warrant only keeping Vick for one season in a gimmick-type role. Instead the team will take their PR lumps this season, while putting Michael through extensive QB training and then make him the QB of the future.
As stupid as this theory may initially sound I am actually beginning to believe it might not be so far fetched. Throw in the facts that McNabb did not get a contract extension this off-season and the teams' current unwillingness to fully support McNabb's "rhythm" claim and Trotter might be on to something here.
But as is always the case with McNabb he is in total control of the situation. If McNabb can deliver a big 2009 season (e.g. Super Bowl title) the door slams shut on a future with Vick. A Super Bowl title would almost surely mean a contract extension and McNabb finishing his career in midnight green, while Vick hits the trade market.
But if the 2009-'10 season ends in disappointment what keeps the Eagles from moving on from the McNabb era? McNabb, being the better QB, would have greater trade value than Vick. For the Eagles, Vick is 2 years younger than McNabb and will have had a full year learning under Reid, McNabb, and Mornhinweg. Maybe in that year Vick can make a career transition similar to Cunningham (scrambler to pocket passer).
As we have seen already this preseason Vick's presence is going to cause a lot of controversy on and off the field. As the weeks pass the number of questions will only increase. As fans we can only hope the on-the-field excitement for the Eagles out weighs the off-the-field circus this season.
And to end the post, I personally hope that the Ax Man is wrong and McNabb puts up MVP caliber numbers this season and is riding the lead float down Broad Street in February. Vick will then be on the first trade out out of Philadelphia next off-season.
Posted by chris klinkner at Wednesday, September 02, 2009