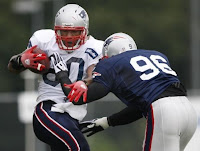 So I guess this is kinda like trading Feeley to the Pats for a back-up TE? Expect Feeley isn't up in New England, well at least not yet.

Today's roster tweak is the Eagles adding TE Alex Smith, formerly of the New England Patriots. I guess the next tweak will be who goes so Smith gets a spot? Will it be Tony Curtis, who recent reports had Reid liking so much after Thursday's performance against the Jets that he didn't trade for a TE?

Or maybe more interesting do the Eagles say goodbye to one of their 7 WRs...Brown or Baskett? I still find it hard to believe that the Eagles can't get at least a low round draft pick for one of these two.

But back to Smith. It terms of a back-up TE the statistics look pretty damn good. In his 4 seasons Smith has averaged 32 receptions, 313 yards, and almost 3 TDs. Numbers that are actually better than starter Celek (though I think a monster season awaits Celek this year) and indicate an athletic, pass catching TE (easing the blow of the Ingram injury).

I like the move. Hopefully the guy can block too!

Aren't they just signing Smith for depth? I too think Celek is going to have a big year (shameless plug - http://undrafteds.com/2009/08/05/brent-celek-philadelphia-eagles-te-fantasy-hot-list-7/), but hey big things were expected from Smith and maybe he just needs a change of scenery to make it happen?