You Can't Write This Stuff 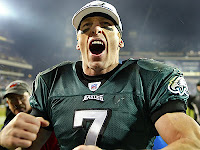 It's like fantasy land over at the Nova Care Complex. If you would have told me a few months back that the Eagles would have both Michael Vick and Jeff Garcia on their roster I would have thought you to be nuts!

But the Eagles made it all a reality today when they signed Garcia. Kevin Kolb you have officially been warned...step your game up this weekend or your NFL career just might be over. Honestly, if the Eagles were to cut Kolb would any team sign the guy? His stats and game action would make it difficult for Kolb to find employment in the UFL.
And nothing like your your make-it or beat-it game happening at the Linc. I can already hear the "We want Garcia" chants following the first Kolb incomplete pass. Hey if the fans are going to chant for Garcia or Vick when Donovan, a Pro Bowler, struggles, Kolb deserves even worse.
The Garcia signing says to this fan that maybe the McNabb injury is more serious that what is being reported, the Eagles have little or no confidence at this time in Vick or Kolb to successfully QB the team, and that this is going to be one hell of a crazy season regardless of W-Ls. (Or could Garcia be that desperate for a team that he would accept game to game employment).
Donovan supposedly may have endorsed the Vick signing. But after 2006 there is no way he can be supporting the Garcia signing. Just imagine a scenario where Kolb gets cut (it's OK to admit a draft mistake Andy) and the back-ups to McNabb are both Garcia and Vick?!?
Posted by chris klinkner at Monday, September 14, 2009

OK, they had to sign someone for at least a week - we CANNOT go into a game with only 1 active QB. That's crazy talk. Now, as to what happens after...I'm guessing/hoping that McNabb sits through our early bye and comes back strong, Vick is able to play well at least in limited situations (and he was cheap, so if he's cannon fodder, who cares?), and Kolb and Garcia fight it out for the #3 spot.

I consider, that you commit an error. I suggest it to discuss. Write to me in PM, we will communicate. chinese ciallis buying Wanna very nice joke?)) How do crazy people go through the forest? They take the psycho path.