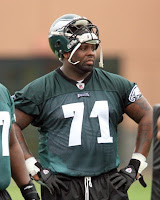 I put myself in the camp of still wanting Jon Runyan back with the Eagles. But if you look back at the film from Sunday's game you gotta see it as a good thing that the Eagles have moved on from Tra and Big Jon.
With Peters and Justice (with some blocking help for Justice) the Eagles got younger, got quicker, and got 2 guys who can get the leverage and pull needed to make a consistent, effective run game.
All this time I have been bitching about Reid not running the ball. But maybe Reid just wasn't able to run the ball effectively with Runyan and Thomas the past few seasons. Sure Reid is a pass first coach, but was his over dependence on the pass a result of playing to the strengths of his 2 starting Tackles?
After the 2 False Start penalties for Peters we got a glimpse of how effective the Eagles run game can be with athletic Tackles (and some other giants along the O-line). The athleticism of Peters allowed him to get down the field as a lead blocker for the RBs. The most effective runs for the Eagles were also off the edges (behind their Tackles).
I am still on board with Runyan coming back. But if he comes back he comes back as a back-up. I am liking the athleticism of the current OL too much to reach back into the past. With McNabb already injured the Eagles need an effective run game. The OL from Sunday is the most effective group for the run game.
And just wait until Herremans comes back!
Posted by chris klinkner at Tuesday, September 15, 2009